Dr. Tom Dennis has been practicing orthopaedics and hand surgery in the Annapolis area since 1991. He specializes in orthopaedic problems of the hand, wrist, elbow and pediatric upper extremity

Dr. Dennis grew up at the Jersey shore and graduated from Rutgers College with high honors in 1981. He received his doctorate at Robert Wood Johnson Medical School (formerly Rutgers Med School) at the University of Medicine and Dentistry of New Jersey. He graduated in 1985, and then completed five years of orthopaedic residency at the same facility. He completed his formal medical training with a Hand Fellowship at the Joseph H. Boyes Foundation at the University of Southern California in Los Angeles in 1991.

Dr. Dennis became a Board Certified orthopaedic surgeon in 1993, and is a Fellow of the American Academy of Orthopaedic Surgeons. He obtained his Certification of Added Qualifications in Hand Surgery in 1995 and in 1996 was elected into membership of the American Society for Surgery of the Hand. He has been on staff at Anne Arundel Medical Center since 1991. He is the past Chief of Orthopaedic Surgery at AAMC. He also served 2 terms on the Medical Executive Committee and was the previous Associate Chief of Orthopaedics. Dr. Dennis also serves on the executive Board of Riva Road Surgery Center.

Dr. Dennis is married and has three daughters. When not at work, he enjoys snowboarding, barefoot waterskiing and spending time on the water with his family.

Dr. McDevitt is a native of New Jersey, attended Bucknell University, and is a graduate of Hahnemann Medical College. His Orthopedic training was done at Portsmouth Naval Hospital. He has board certification in orthopedic surgery and sports medicine. At the Annapolis Hand Center he treats non-surgical disorders of the upper extremity.

Half of Dr. McDevitt’s 24 years of active duty service were spent at the United States Naval Academy as Chief of Sports Medicine and Brigade Medical Officer. He continues as a volunteer team physician for the Navy basketball teams. Dr. McDevitt has held a number of impressive leadership positions in orthopedic organizations including Chief of surgery at Anne Arundel Medical Center and the editorial board of the American Journal of Sports Medicine. He also worked as the Orthopedic Surgeon for the US Congress and the Supreme Court for 12 years.

Now working towards educating future physicians, Dr. Mc Devitt teaches the history of medicine courses to medical students and undergraduates alike at the University of Maryland.

Krystal graduated from Lee University with her Bachelors in Health Science in 2000, and earned her Doctorate in Physical Therapy from the University of Maryland Eastern Shore in 2005. She has treated patients in a variety of settings since then including outpatient orthopedics and acute care. Krystal has focused her treatment to primarily the upper extremity beginning 2015 and enjoys the challenges and complexities of treating that region.

Beyond her passion for experiencing her patients improve, Krystal also enjoys spending time running after her son, trips to farmers and flea markets, trying local restaurants, and traveling with her family.

Many of our staff has been with us since we opened our own office in April of 2013. This is our Annapolis Hand Center family! We believe in growing positions rather than growing into them. For this reason we support our staff in furthering their medical and professional development. 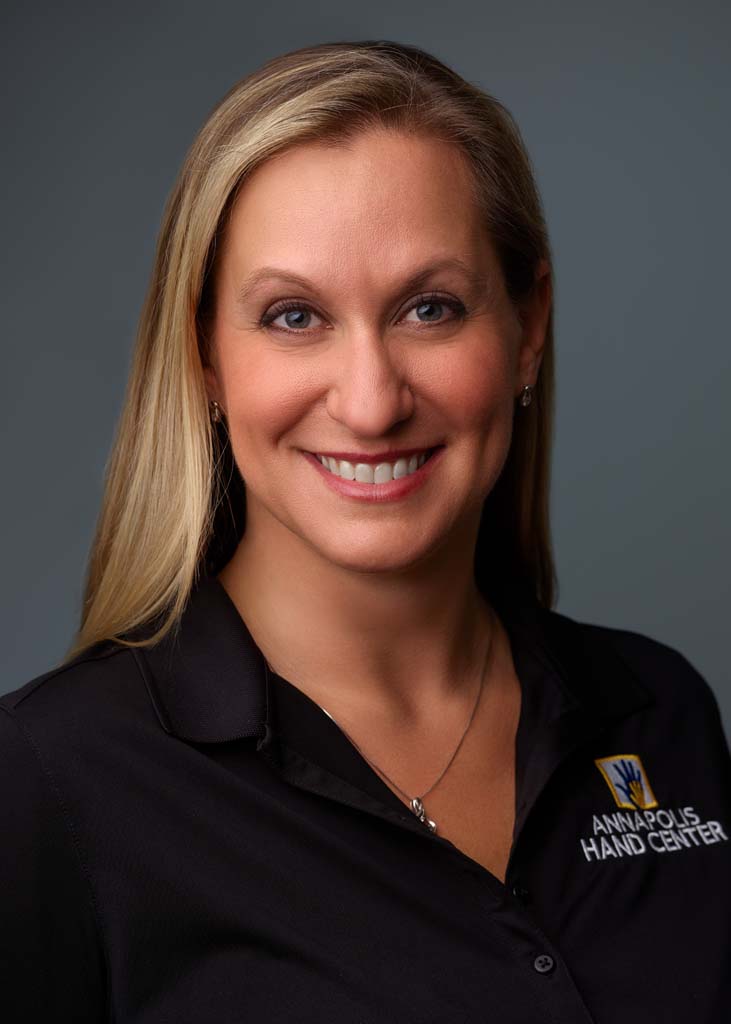 Jess has been working with Dr. Dennis since the start of the Annapolis Hand Center. She coordinates patient care and is the person to speak with for scheduling surgery. She has been working in the medical field since 2006. Jess grew up on the Eastern Shore of Maryland. In her spare time Jess enjoys spending time with her family, reading and beach vacations. 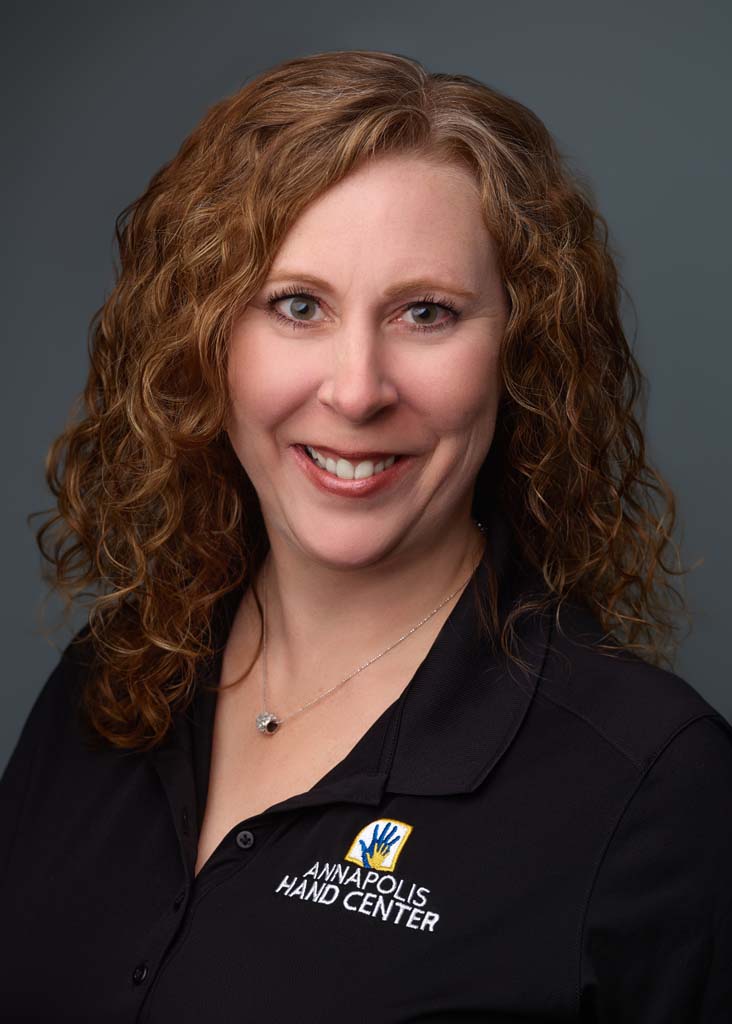 Jen began working with Annapolis Hand Center in 2013. She came to us with several years of experience lending to her expertise in the medical billing field. She is the point of contact for any billing, insurance or payment concerns. She lives in Riva with her husband, 3 children and 2 dogs. Out of the office Jen enjoys to travel, hike, kayak, paddleboard, and cheer for her favorite hockey team, the Washington Caps. 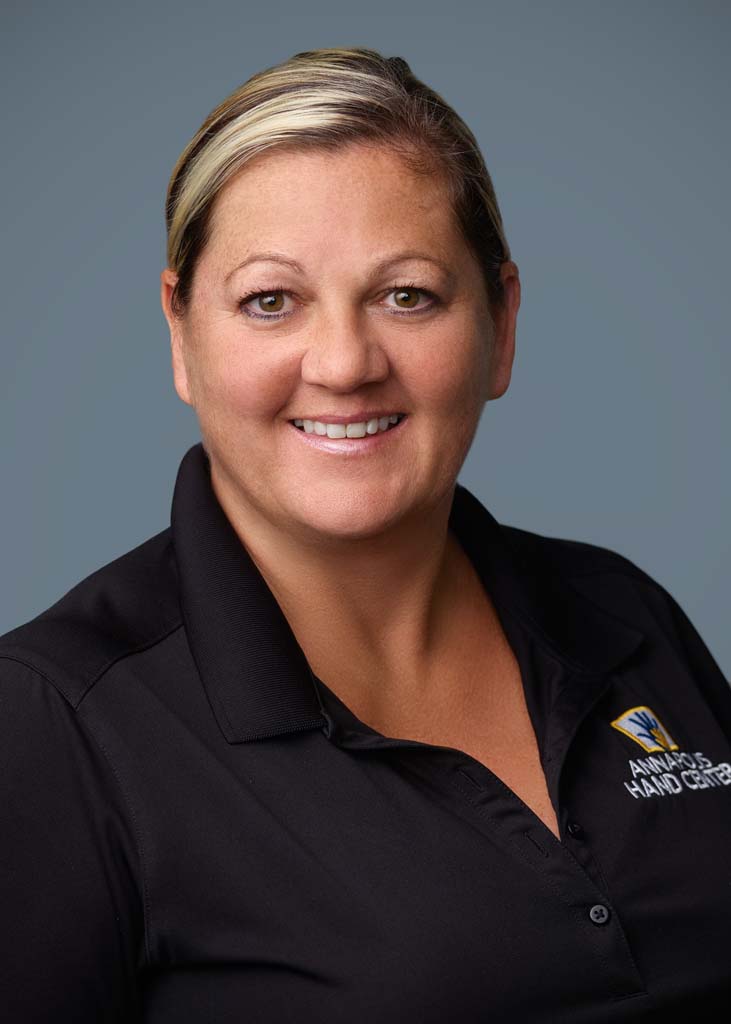 Krissie has been with Annapolis Hand Center since 2014. She also had worked with Dr. Dennis at his previous practice for thirteen years. Krissie enjoys her career in upper extremity orthopedics. She grew up in Howard county Maryland. She is married and has one son. Krissie enjoys spending time with her family, playing with their dogs, going to the beach, boating, crabbing and watching the Ravens play football. 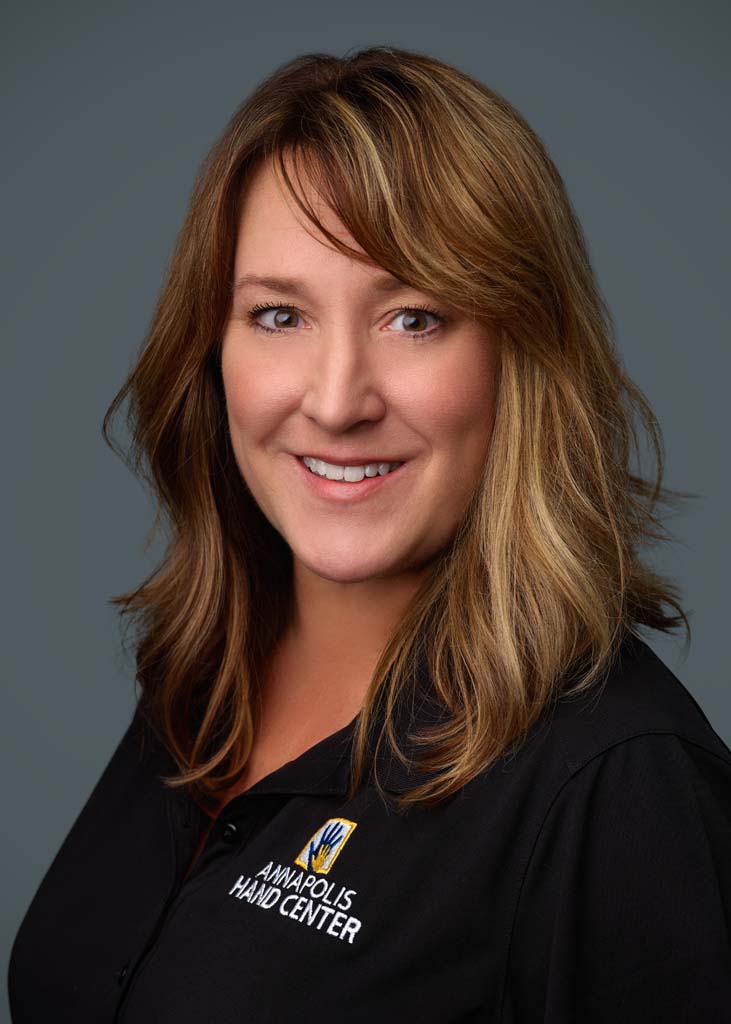 Genelle has been with Annapolis Hand Center since 2013 and is responsible for physical therapy benefits and front desk duties. Genelle loves supporting all of our patients but has a special place in her heart for babies and the elderly! She lives in Severna Park with her family. Genelle enjoys cooking, spending time outdoors, and her pets.